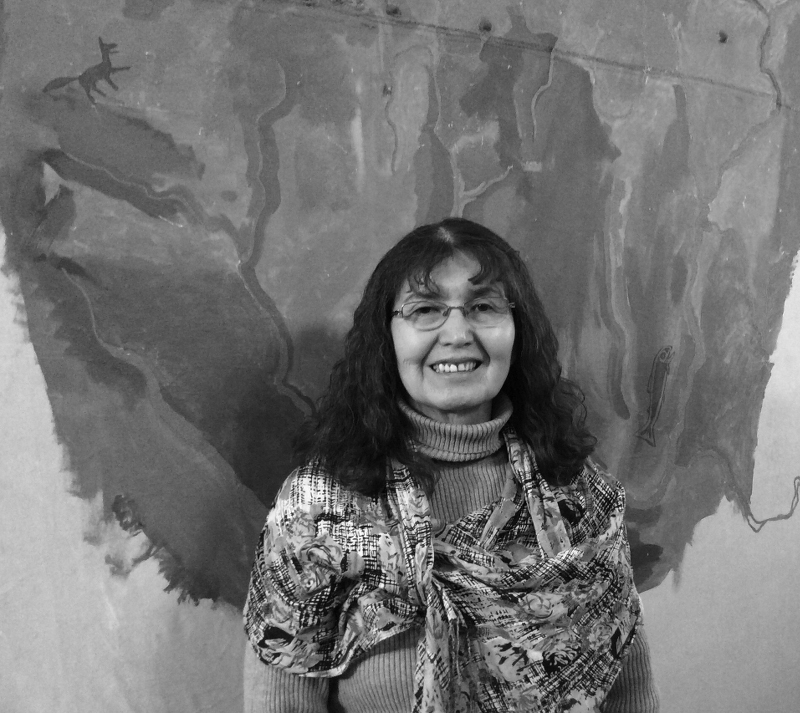 Interviewed on November 7, 2014 by Elizabeth Pinnington.

Pinnington: What is it about your story that informs the perspectives that you have and the work that you do today?

Armstrong: I’m Indigenous, and I’m Indigenous to this part of Canada, to the Plateau tribal areas, and Interior Salish. So one of the things that informs my perspective is that for me, this isn’t Canada: this is Syilx territory. And it has been Syilx territory since at least the post-glacial period, according to all the research that has been done by linguists and archaeologists. One culture, here on this land.

So that history informs how I see the settlement of Canada. When I was in high school and university, for instance, we all studied the history of Canada. I realized that the local history here was really skewed in terms of what was presented in the textbooks. What was presented made early settlement really positive and watered down to be more palatable for the Settler society. That really affected the way that I feel about those injustices that haven’t been reconciled.

Reconciliation isn’t just about hearing the truth, it’s about acting on the truth, to make changes and to reconcile some of the really serious injustices that are still happening and still present (economic injustice for instance). Government proclamations continue to look at our lands as lands to be taken, resources to be taken—and continue to not look at the truth. We have legally occupied those lands for thousands of years and have the right to participate in decisions about those lands, whether the decisions are about development or protection. So those are some of the issues that are still outstanding in terms of how Canada can think about its 150 years of being.

Pinnington: So what does reconciliation involve?

Armstrong: Reconciliation isn’t about Canada’s view about it; it’s about the Indigenous peoples’ view about it.

I think society will be better for that, and I think Canadian people are to a large extent willing to do that if they’re informed about it. I have a lot of optimism that peoples in Canada are in a position to take the high road and be a model for the rest of the world in relation to that.

For instance, how we define Indigeneity itself might inform how we need to look at climate change. Indigenous people have survived these 150 years. Like George Manuel and other leaders have said in the past, we were not meant to survive: we were meant to be totally assimilated and be like the rest of the Settler populations. Yet we have survived within our identities, and we will continue to survive within our identities, and that’s to the betterment of Canada, that’s not to the detriment of Canada. Finding a way to survive has provided us with strengths, with tools, and with a better understanding of how we might be partners in this country.

Pinnington: If you could ask a clairvoyant three questions about the future of Canada, what would you want to ask?

Armstrong: Has Canada moved away from its colonialist understanding of who Canada is? Has it indigenized itself to the reality of this country and not to an old European construct of domination and governance?

Another question I would have is, has Canada taken a strong position in terms of working with its Indigenous partners to reconcile some of the issues that deep down are affecting all of society? For example, policies that create minorities or the idea that there are minorities. Really that’s just a construct. This construct creates ethnicities and the idea that there are minorities. Really those don’t exist; we’re human beings that live in different parts of this country that require different ways and mechanisms by which we can cooperate locally in terms of our environment, our economic needs, and our social requirements. There are no minorities in that.

The other part I would ask is, how well are we doing aligning with other nations of the world that are much further ahead than Canada in looking at deeper issues that relate to Indigenous knowledge and Indigenous peoples? So with the example of climate change, are we really indigenizing ourselves to that area, and looking at how education systems and media systems might support that? What I mean is that very, very few people in any locality understand anything about their environment, their watershed, their local indigenous fauna and flora, and yet they are casting ballots to make decisions about those things. So re-indigenizing doesn’t mean turning people into Indians or whatever; it means becoming responsible to the location that you’re in from a knowledgeable point of view in making decisions that affect every one of us.

Pinnington: If things turn out well over the next 20 years, what will have happened?

Armstrong: There would be some changes in how resources are thought about: not as resources that are to be extracted by foreign corporations, but as resources that are part of that landscape and the people who live there. To a large degree, that is informed through Indigenous partnering and protection for the things that are required for the next seven generations. If in the 20 years the legal landscape has opened some doors and has moved towards real, balanced partnering with Indigenous people, then that will be a huge move forward.